No orders will be processed during website restructuring. Dismiss

My name is Susan, and I’ve been a functioning pickleball addict for over two years. The addiction took hold of me quickly. It was surprising how easily I was hooked.

I see now that there were warning signs, but I ignored them. My story will show you that pickleball addiction does not respect age, race, gender, or economic status. Current and former athletes are easy prey, but even the non-athletic and sedentary (like me) are vulnerable.

It can happen to anyone.

How Pickleball Found Me 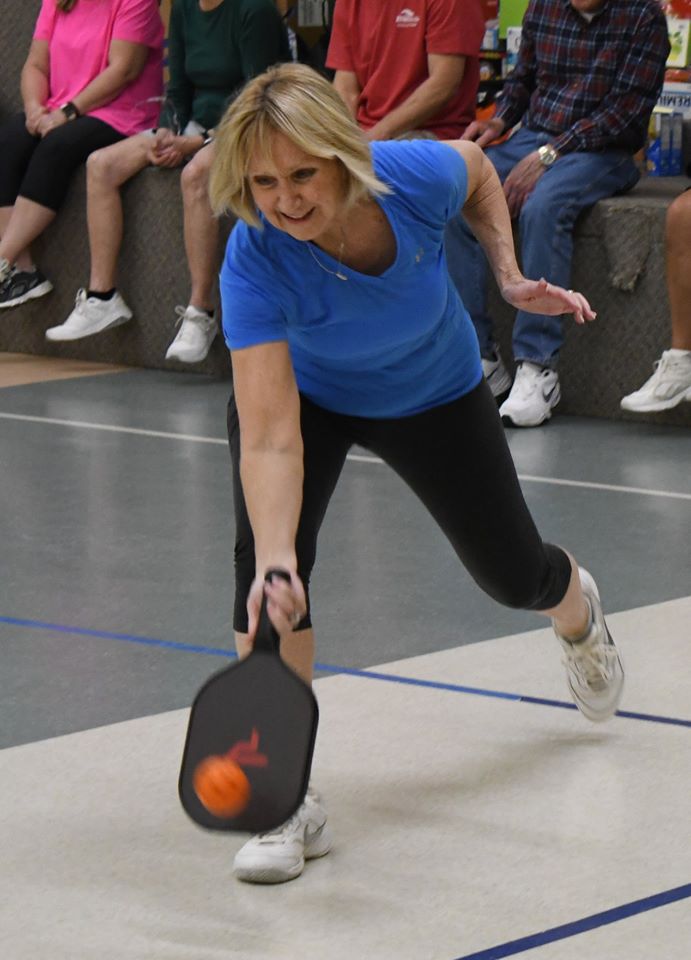 My introduction to pickleball began, innocently enough, with a tour of the new rec center that was getting ready to open in my city.

A toned young fitness instructor led my group into the massive gym, seductive in its newness of gleaming wood and shiny metal. Lines in bright colors of red, blue, and green marked off courts on the floor. The guide explained that these courts were for basketball, volleyball, and pickleball.

Wait a minute – what kind of ball?

I watched in awe as several members of the group broke away and raced over to examine a green-lined court. When they returned, I whispered, “Hey – what’s pickleball?” to the white-haired woman next to me. She looked at me as though I had just crawled out of a time capsule.

“It’s the fastest-growing sport in the United States!” was her response.

I had been enlightened, sort of. Whatever this sport was, I had never heard of it, but my curiosity was aroused. Since the rec center wasn’t yet open, I scoured social media sites to find a group that was actively playing pickleball, and I went to watch a few games.

How I Got Hooked

These people seemed to be having an absurd amount of fun. They laughed a lot. They sent the neon-orange and yellow pickleballs sailing across the net. They called out scores in a secret code of three numbers.

That was the first hook. Who wouldn’t want to be one of the cool people? I certainly did.

The second and most deceptive lure is how easy the game appeared. Most of the players were at least middle-aged, and some were obviously older. Could I hold my own with these seniors? Ha! How hard could that be?

Beware of a false sense of smugness – it will draw you in.

By the time you realize that the game involves skill and coordination, it’s usually too late, because by then your ego is involved. Pickleball addiction is fueled by the personal challenge of continuous improvement. Get ready to sign up for lessons, workshops, and drills.

After a week of playing with loaners, I bought my own paddle. That was the third hook. Once you’ve invested, you’re well on the way to a long-lasting addiction.

At this point, you might as well come to grips with reality – and fully understand what may happen to you as the result of being an addict. I really wouldn’t want you to go in blind.

Pickleball can affect your health

It’s important to understand that repetitive engagement in pickleball can affect your health.

If you think you may be addicted, check the way your body moves on the court. Are you now returning shots that you used to regularly miss? Are you able to spot a spinner and catch it before it makes that bounce-hop in the opposite direction? Can you smack a ball in the air without sending it into the next zip code? If so, your agility and hand-eye coordination have certainly been affected.

You may also notice that your energy levels are increasing. With an addict, this becomes apparent when you have trouble walking away from the courts, pleading for “just one more game.”
Has your dominant arm become more muscular? Have you noted a shift in attitude – possibly becoming more outgoing and optimistic?

If these symptoms apply to you, be sure to mention them to your doctor at your next checkup, but try not to brag too much.

Pickleball can consume your calendar

Once you are sliding into addiction, pickleball events can take over your waking hours. You find that you have trouble working dental appointments, haircuts and grocery shopping into your busy pickleball schedule. You start to plan vacations around pickleball venues.

Hardened pickleball addicts will go to great lengths to feed their addiction. A friend of mine is a corporate attorney. She has been known to arrange her important meetings for early mornings so that she can sneak out of the office for a couple of hours to play pickleball. She’s also hopped off a transatlantic flight to drive directly from the airport to a pickleball game.

Pickleball addicts frequently feel the need to identify with others like themselves, branding themselves with shirts and other gear that display warnings to beware of the paddle, stay out of the kitchen, and dink responsibly (to name a few).

As a functioning addict, I admit to owning several paddles, pairs of athletic shoes, tee shirts, bags, and drink containers. I believe it’s important to be transparent – not to mention colorful. My family happily supports this, because it takes all the guesswork out of gift-giving.

And here’s a tip for potential addicts: dogs, coffee, and wine are powerful symbols which have become associated with pickleball. Apparel which includes these themes has an almost universal appeal. People who identify as liking dogs, wine, and coffee see themselves as cool and even “normal.” This is one of the ways in which a pickleball addict can easily blend into the population.

Pickleball can be transformative

Pickleball addiction can change your life, in a sneaky sort of way.

One day, you wake up feeling happier, healthier, and more confident. Optimism radiates from you. You put on your favorite pickleball shirt, grab your paddle and charge out into the world. You feel invincible!

Because, unbelievably, you and your partner have beat a couple of teenage homeschooled kids, 11-4!

That high will last you all day.

A final note on preventing addiction

You should know that pre-existing conditions do not necessarily protect you from pickleball addiction.

I know strong players who have Parkinson’s and multiple sclerosis. One man, while waiting for a new kidney, alternated his dialysis days with pickleball.

Pickleball addicts have a powerful drive to be on the court. It’s almost routine to see players with some limb that is wrapped in a bandage. Addicts will play with neck braces and heart monitors. They will come back to the game after concussions and joint replacements. You just can’t get rid of them.

The only sure way to avoid addiction is to never pick up a paddle. Turn around. Walk away. Don’t look back.

So that is my story. I have no plans to recover from my addiction. I speak for myself and the growing number of addicts of the fastest-growing sport in the United States.

9 thoughts on “The Truth About Pickleball Addiction”